Composting is the natural process of recycling organic matter, such as leaves and food scraps, into a valuable fertilizer that can enrich soil and plants. So begins The Natural Resources Defence Council’s Composting 101. 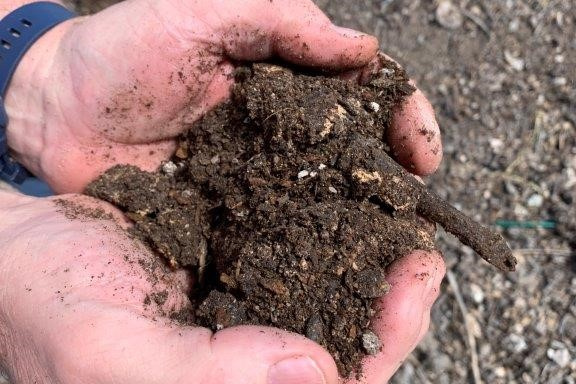 To learn more about compost, its use, how it’s made and benefits it brings to the vineyard and soils, I had some fascinating discussions with Johan Reyneke of Reyneke Wines and Ken Forrester of Ken Forrester Wines, both of whom are enthusiastic compost makers and users.

There are many layers to its composition with its role in regenerative agriculture essential, according to Johan Reyneke, who practises biodynamics on his Stellenbosch farm. He elaborates; ‘The purpose of compost is to unlock the soil’s potential, to feed it, rather than the plants. But by feeding the soil with humus, we’re also creating healthy plants; there’s a correlation between the two.’  That correlation has resulted in a saving of the annual R100 000 for Reyneke, the sum which used to be spent on fertiliser.

To the nub of what is compost; organic material which, when broken down through microbial activity, creates humus, the finer the material breaks down, the higher the humus level.

As a biodynamic farm, Reyneke aims to be sustainable, regenerative and self-sufficient, which means using all the farm and cellar’s waste to create compost; skins, pips, water, cow manure; house waste, eg paper, is also included. Ken Forrester, who was due to go organic in 2002, a year when downy mildew destroyed half his crop, even after spraying, now farms sustainably, using no pesticides or herbicides.

From a scientific study of his soil, Ken found compost using skins and pips introduced unwanted potassium; he now uses horse manure and stable shavings, tree trimmings and other matter.

Skill and understanding are required in the building of compost if one wishes to reap its benefits. Johan talks of ratios – one part nitrogen to 30 parts organic matter – layers, moisture, oxygen and temperature, which all impact on final quality.

Whereas Ken’s compost heaps are a year-round exercise, Reyneke’s are made once a year. When to do this is also important; ‘It mustn’t be too hot, too dry, too cold or too wet’, Johan explains. This usually means around April/May when it’s cooler and some rain has fallen.

Measuring around 2 metres wide, 1.5 metres tall, once assembled, the heaps still need attention. Depending on whether a coarser or finer humus is required, the cycle of watering and turning can be done more regularly (finer) or on a longer cycle (coarser). Johan’s are covered with straw and are sprayed with biodynamic preparations.

Once ready, the compost is placed, once a year, on the banks where the vines grow. The microbial life in the compost breaks down other matter between the rows.

Like Johan, Ken also grows a variety of cover crops to avoid the monopoly of monoculture and, when mowed create a mulch. Together with the compost, this mulch helps to balance the soil and prevent seeds from germinating. Regular analysis on the petiole of a leaf indicates what the soil is giving back.

What are the main benefits Ken and Johan have seen from the use of compost in regenerative agriculture? ‘Balancing the soil and reusing what you have on the farm,’ Ken confirms. More specifically, Johan reveals that in the 20 years of using compost, it has helped to halve irrigation, reduce run off and erosion.

Compost creates a perfect cycle of giving back to the earth what has been taken from it.