Standing at a lookout point on Kaapzicht farm with Danie Steytler Jnr, Stellenbosch’s Bottelary in all its glory is laid out below. The wind-scrubbed sky is bright above the rolling green slopes, and in the distance are Table Mountain and the Atlantic Ocean.

“This is where our name comes from, ‘Kaapzicht’ means Cape View,” Danie explains, a glass of the estate’s pinotage rosé in-hand. The Steytlers have been farming here since 1946. Danie is its fourth generation winemaker. Like his father, he also grew up among the vines and fynbos corridors of the farm.

“There was plenty of adventuring in my childhood,” he laughs. “We would spend our days building hideouts and tree houses. My school holidays were also spent working on the farm; I had my own spade to chop out weeds and when I was ten I got my first tractor.” 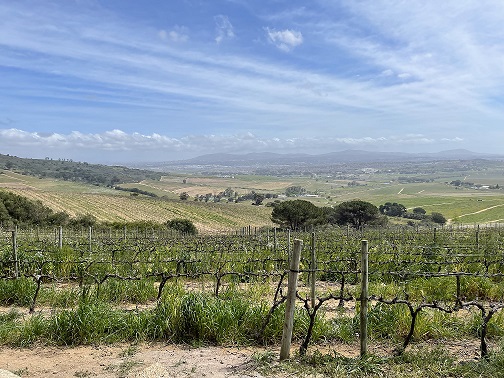 Winemaking also made an early appearance. “When I was 13 I made my first barrel of wine, a cabernet, which I used as presents for Christmas and birthdays.”

After school he built on that first barrel with a degree in Viticulture and Oenology from Stellenbosch University. He augmented his learning by working two vintages at Waterford under Kevin Arnold as well as a stint at Chateau Grand Mayne in St Émilion.

A period at Jordan Wines followed, then he once again took to the sky to work at Alan Scott in Blenheim, New Zealand, and then to Stags Leap in the Napa Valley. For the next couple of years he worked as a flying winemaker, regularly being sent to Italy, Greece and South Africa to source and blend bulk wines for the Swedish Systembolaget.

Finally, in 2009 he started on Kaapzicht as winemaker.

We continue the tour of the farm, bumping over the rocky soils in his bakkie. He stops to show me the venerated 1947 chenin vineyard, which makes a wine of the same name. The old bush vines were planted by Danie Jnr’s great grandfather. A registered single vineyard, it is the second oldest chenin block in the country. Originally 6ha in size, only 1ha of the very low yielding vineyard remains. The wine it makes is critically acclaimed and quickly sells out upon release.

The next generation
All that fresh air can make one hungry. Luckily Danie’s next passion after wine – is that favourite South African pastime, the braai. We head to his family home where he lives with his wife and two young children, located directly adjacent to the wine cellar.

Inside a pile of vine branches glow in the hearth. While we wait for them to turn into coals, Danie shows me the new tasting room, just off the dining area. Displayed along a shelf is a collection of bottles, starting at 1984 (the first bottled estate wines). The wines show the march through the years and the corresponding styles of the time, ending with new labels commissioned by Danie.

“It’s part of us celebrating our 75th anniversary,” he elaborates. “But we also wanted something to mark the new generation taking over from my dad, uncle and mom.

“We’ve aimed to give every wine a personality, still with the feeling of being a traditional winemaking family by paying homage to those that came before us, but with a younger, more modern feel.”

Pinotage specialists
The focus is on traditional varieties: chenin, shiraz, cabernet and pinotage. Danie is also experimenting with some old vine cinsault sourced from the Bottelary, regionality is important to him. So much so, he has just bottled a Bottelary Blend, a multi-parcel blend from across the ward with the intention to create a calling card for the region, with the neighbouring estates making their own versions too.

Since the very beginning, pinotage has been an integral part of Kaapzicht’s story. It was the grape that put them on the map. In 2004 the Steytler Vision 2001 received the Chateau Pichon Longueville Comtesse de Lalande Trophy for Best Red Blend in the World by the International Wine & Spirits Competition in London. In 2009 the flagship Pinotage won the Decanter Regional Trophy and went on to win the Decanter International Trophy for Best Single Red Varietal in the world.

And now Danie is ushering the estate’s pinotage offering into a new era. Cleverly showcasing the different expressions that can be achieved with this versatile grape.

“We’re a traditional brand. I’m not trying to change that, I’m proud of our roots, but as a winemaker I have to challenge myself to find new expressions, to always up the quality and to try and make something different.”

We already tried the Pinotage Rosé 2021, while up on the hill enjoying the views. It’s a refreshing dry aperitif: pinotage’s bright berry flavours being well suited to rosé production.

The next in-line is the Skraalhans Pinotage 2020, an exciting new wave debut. The grapes were picked earlier resulting in an alcohol of 12.5%; freshness dictated the winemaking with 20% whole-bunch fermentation and no new oak. The name implies the intention (‘skraal meaning skinny) and the wine is light-bodied offering good fruit concentration. Next is the Rooiland Pinotage 2020, made in the more traditional style with 40% new oak, more full-bodied it nevertheless manages to be fresh with a wonderful clarity of fruit.

Then the kingpin, the Steytler Pinotage 2018 concludes the pinotage journey. Only made in exceptional vintages, this blockbuster is built to age and represents the mission of the Steytler family.

“It is our patriotic devotion to the trials and tribulations of mastering pinotage since its earliest beginnings right here in the Bottelary Hills. As this is South Africa’s only truly original grape, we are focused on showing its finesse to the world.”

A torch his father passed down to him – one that he has picked up and carried with aplomb and undeniable skill into the future.

“My father is a great man, I’ve learnt a lot from him. He’s always taught me not to become boastful or big headed, to rather stay rooted while reaching for the stars.

“He’s also always said to me: ‘you only have one life, you must enjoy it’. Something I live every day.”

This is evident as wine glasses are topped up at the long wooden table, family and friends happily chatting, the sizzling steak being sliced and passed around.

Long may Danie Jnr stand on the hill overlooking his family’s generational farm, enjoying that rather special, Cape View. 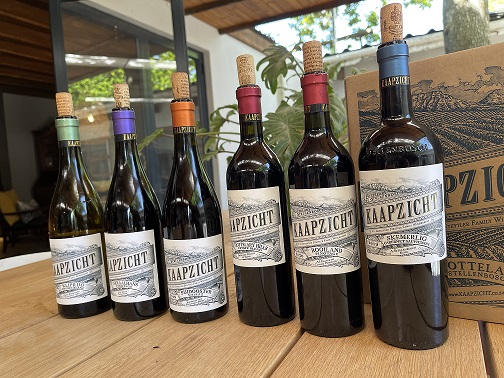 Note: The Kaapzicht wines are available in the UK. For local stockists please contact their UK importer, Seckford Agencies.