These days, many wines are sold by the grape variety or varieties that they are made from, but this was not always the case. In the classic wine regions of Europe, people labelled wines by where they came from, and the grape variety was secondary. It doesn’t mean that it didn’t matter – usually each region had a small set of varieties that had proved to be well adapted to the local climate and soils, and the wines were either made from one of these, or a blend. Some regions, such as Burgundy or Piedmont, specialised in varietal wines (wines made from a single variety), whereas others more commonly blended (such as the southern Rhône or Bordeaux). In the ‘new world’ countries, for a long time the names and varieties of the ‘old world’ were co-opted, but since the 1960s it has become much more common to see wines marketed by the grape variety or varieties they contained, and South Africa is no exception in this respect. What I find interesting is which varieties were chosen, and why. And also, how the varietal mix in South Africa might be changing over coming decades. 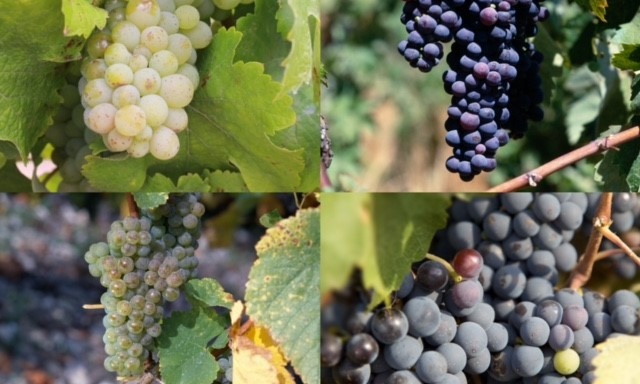 What is a grape variety, anyway? Almost all the wines that we drink come from the same species of vine, Vitis vinifera. Recent research shows that this species was domesticated from its wild relative (V vinifera sylvestris) in two locations, one in Transcaucasia (around modern day Georgia and Armenia) and once in southwest Europe (the Iberian peninsular). Through repeated crossing, selection, and propagation, we now have more than 1000 varieties that are used to make wine – the exact number isn’t clear because there are so many synonyms, where different names are used for the same variety.

Technically, a new variety arises when grape vines have sex and then a new vine is grown from seed. This is complicated by the fact that Vitis vinifera varieties can have sex with themselves, and the resulting new variety might look nothing like the solitary parent. Once you have a good variety, then it is reproduced by taking cuttings, in a process known as vegetative propogation. The new vines are genetically identical to the former. There is also talk in the wine world about clones. Over time, despite the vegetative propogation that should mean children are the same as their parent vines, mutations can occur. The vast majority are harmless, or bad, and many are invisible. But some might cause the vine to take on interesting attributes: there might be more grapes, or better grapes, or better disease resistance. Then cuttings are taken from the vines with these beneficial differences and this becomes a new clone. The complicating factor in this definition of variety – that sex is required for a new one to originate – is that there are a few notable clonal differences that have led to the same variety being called a different variety. For example, Pinot Noir, Pinot Gris and Pinot Blanc are all the same variety, and are technically clones (mutations have changed the skin colour of the grapes), but we regard them to be different varieties.

Different varieties thrive in different conditions. It’s remarkable how sensitive different varieties are to climatic differences. This is probably the chief reason why certain varieties are grown in certain places, but it is by no means the only one. There are often economic reasons for these choices, as well as historical accidents or artefacts.

So let’s take a look at the most abundant varieties in South Africa:

Ha stands for hectare, which is 100 m x 100 m, just a little bit bigger than a football or rugby pitch. There are 92 000 hectares of vines in South Africa.

Those who have followed South African wine for a while will not be surprised to see Chenin Blanc way out in front. It’s a variety that was originally widely planted for brandy, like number 2 in the list, Colombar. Both retain acidity well in warm climates, but unlike Colombar, which is rarely seen on table wine labels, Chenin makes really compelling table wines, and it has become South Africa’s signature white.

The reason Sauvignon Blanc is so high up the list is not because it is particularly well suited to the warm Mediterranean climate of the Western Cape, but because it sells well. People love it, but it’s only in the cooler regions where it really excels. It wouldn’t be an obvious choice for fine wine production in regions such as Paarl or Stellenbosch.

Cabernet Sauvignon is also not an obvious choice for a Mediterranean climate, but along with Merlot was widely planted when the wine industry had Bordeaux as its model for fine red wine production. The fact that there are some excellent examples of both varietal Cabernet Sauvignon and also Bordeaux-style blends is because viticulturists and winemakers are skilled and have learned to deal with the challenges of the climate for these varieties. But Merlot’s future – it needs lots of water and doesn’t like too much heat – has to raise questions as to its long term future. Mind you, punters seem to love it.

Syrah and Chardonnay are two international varieties that are widely planted, and do really well in South Africa. They may be commercially handy, but they also make some really fine wines.

There’s quite a bit of Pinotage grown, and this is a variety that has detractors, but which is commercially relevant and looks to have a bright future. Lots of people like it, in its various styles. I’m glad, personally, to see more lighter, more elegant expressions emerging.

Cinsault is a star. Here’s a variety superbly adapted to warm, dry climates, and with lighter-style red wines catching on, it’s having its day in the sun. There is plenty of it in the Western Cape, although there used to be an awful lot more. It makes a range of wines, ranging from light juicy fun expressions to ones with a little bit more oomph, though it’s almost always fresh and very drinkable. It’s also proving its worth in red blends, where it can provide acidity and freshness.

There isn’t a lot of Grenache grown here, but those who are working with it are very happy. This is a variety often dubbed the Pinot Noir of the south, and it deals well with heat. Handled well it can make really elegant, fine reds.

A minor grape, but one that is being championed in some quarters, is Gamay. The grape of Beaujolais, it is coming back into fashion globally and the tiny quantities in South Africa are being added to at the moment, albeit on a small scale, with Radford Dale winery pushing it.

A fresh addition to the varietal landscape is Nero d’Avola, which was brought into the country by Bosman, who handily own a vine nursery. They’ve just released the first South African wine from this grape, which hails from the warm climate of Sicily. It’s called Nero, and is a collaboration with Thapelo Mokoena.

Change takes a while in the wine world, and any shift in the country’s varietal landscape will be a slow one. But there’s lots of momentum now to make good use of some of the vineyards that are already here, as well as a push to discover new varieties that could thrive. The varietal future looks to be an interesting one.