Trunk disease and the threat to old vineyards

One thing that sets South Africa apart as a wine country is its Old Vine Project. This initiative began in 2002 when renowned viticulturist Rosa Kruger began trying to catalogue all the old vineyards in the western Cape. After calling up farmers with the aid of a team of volunteers, she then launched the I Am Old website, which gave the details and contacts of all vineyards over 35 years. In 2016, Johann Rupert provided the funding that enabled the Old Vine Project to really establish itself, and André Morgenthal was hired to help. So now there is a proper initiative to catalog and help protect this precious resource. 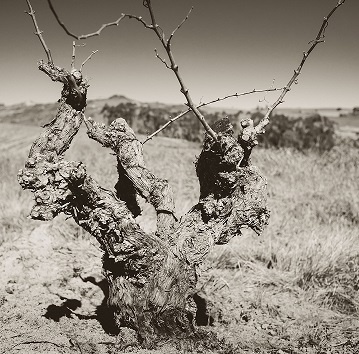 But there is a cloud on the horizon, and this affects not just South Africa, but also all old vineyards worldwide. It is grape vine trunk disease. In order to grow vines to make wine grapes, they need to be pruned every season. A vine’s normal pattern of growth is to be a creeper that climbs up trees. It is a structural parasite, unable to support itself. Instead of spending years building its own woody trunk, it takes advantage of the tree’s hard work, and climbs up to the top of the canopy, where it produces grapes for the birds to eat and thus disperse its seeds. To make wine, the vine has to be trained in specific ways – often on a trellis, but sometimes as a free-standing bush vine – and inflicting pruning wounds on it every season of varying degrees of severity, opens up a route in for fungi to infect the woody tissue.

Young vines seem to cope OK with the wounds inflicted by the pruner’s secateurs. Where it becomes a problem is with older vines. Here, the work of Italian pruning expert Marco Simonit (who has established a successful pruning consultancy, Simonit & Sirch) and François Dal in the Loire Valley, has shown that over time, the pruning wounds block the natural flow of sap in the vine, weakening it. With each cut, there is a ‘cone of dessication’ spreading back from the cut approximately 1.5 times the diameter of the cut made. The wood dies and dries out. As a vine advances in age, these accumulated wounds make it susceptible to fungal diseases, known as trunk diseases, such as Esca or Eutypa. Eventually, the vine dies. Simonit has been busy teaching pruning methods that respect the flow of sap in the vine, making cuts always on the same side, and just cutting one or two year old wood, not making bigger cuts of older wood. Dal has been doing the same in the Loire, where trunk disease is a particular problem because Sauvignon Blanc is especially susceptible. The belief is that pruning properly will increase the life of vineyards and lessen the likelihood of trunk disease.

Trunk diseases are the focus of a lot of the wine world’s attention right now, because they are on the rise globally, including in South Africa. ‘Trunk disease is definitely on the increase,’ says viticulturist Jaco Engelbrecht. ‘I have seen the numbers of Esca skyrocket and I seem to be the only viticulturist in South Africa to be very worried about this.’

He thinks that one of the explanations is that changes in fungicide use might be contributing to the problem. The main fungal disease affecting vines in South Africa is powdery mildew, and the traditional remedy was to dust the vines with elemental sulfur – a yellow powder. Now, farmers are using more modern fungicides. ‘I strongly believe that when we stopped using dusting sulfur around 20 years ago, we opened the gates for diseases to thrive,’ says Engelbrecht, who runs a viticultural consultancy called VisualViti. ‘According to studies done at Stellenbosch University, dusting sulphur was the only application that killed off the majority of Esca-associated spores. none of the chemical applications had this profound effect. Furthermore we stopped lime sulfur during winter applications. Although this was not a general practice, it was used to control weevil and mealybug populations, quite successfully, but the spinoff was that all or most fungus spores were also eliminated, something that is especially positive during pruning season.’

‘Jeff Joubert, retired viticulturist and legend in our industry, told me that they rarely seen powdery mildew up until the early 1990s. Up to then dusting sulphur was the norm. Victor Sperling of Delheim told me how they used to help at 03:30 in the morning before school, and all the kids and teachers kept clear of them the whole day!’ One of Engelbrecht’s clients is Eben Sadie, and three years ago they began using dusting sulfur again in the farms that Sadie buys from, and also in Sadie’s own vineyards.

The other threat to the old vines of South Africa is the quality of nursery work. If you don’t start with good vines, then they will likely not make it to old age (which in South Africa is counted as 35). One of the issues is that all grape vines have to be grafted onto phylloxera-resistant rootstock. Phylloxera is an aphid that attacks roots of Vitis vinifera, the species of vine that includes pretty much all the varieties that are used to make wine. It almost wiped out global viticulture in the late 19th/early 20th Centuries until the solution of grafting onto resistant native American grape vine roots was discovered. Poor quality grafts can limit the life of a vine.

Engelbrecht says he recognizes that nurseries have a tough job, but many aren’t performing well enough. ‘The unfortunate situation in which we find ourselves, not only in South Africa, but in a few other countries as I have gathered speaking to other viticultural guys, is that the numbers game is king,’ he says. ‘The nurseries push the amount of vines to be grafted far beyond that which they can handle.’ So they use the less labour-intensive omega graft, which can deliver less satisfactory results, and they use hormones in the wax that is used to seal the fresh graft.

‘But let's start at the beginning of this cycle,’ he says: ‘rootstock and scion. Farmers get paid for the volume of material produced, or where the nurseries farm it themselves, they need maximum yield. They push this with water and nitrogen. This has a detrimental effect on the quality of the material, even before grafting. Grafting itself is stressful to any plant, so if you start with material that stressed you have a double whammy. We all know that too much nitrogen weakens the plant’s immune system, so in rootstock varieties that is already a vigorous grower, like Ramsey, this might pose a big issue.’

But one other concern for the future is the loss of some of the Cape’s most interesting vine genetic material. Instead of selecting for interesting vine material from old vineyards (called massale selection), there’s increasing use of clones. ‘I have found and monitored a Chenin Blanc vine with a stable and visible mutation way up in the Skurfberg next to the Kokerboom Semillon of Eben Sadie,’ says Engelbrecht. ‘When I asked the nurseries if they would help us clean it up and propagate to see the potential, they declined saying that there are no commercial value for them, as we already have a lot of Chenin Blanc clones and most bear quite well. This was an indication for me about the attitude towards future viticulture, something that both angered and saddened me. We will lose this genetic pool, much like we will lose a lot more over the coming years.’

‘Back in the day when the KWV still had viticulture advisors, they used to extensively go to the farms and help with Massal selection of the best vines, not just the heaviest bearing ones. Ask David van Velden of Overgaauw. His grandfather told him how they used to select the best vines and the KWV would help with propagation for the industry. These vines were also sometimes sold at vine auctions between the farmers, much of which ended in old field blends as interplantings, visible in a vast majority of the old vineyards scattered across the Western Cape.’

One answer could be to plant rootstock varieties, let them grow, and then graft the Vitis vinifera variety in the vineyard. ‘Together with a few of my clients we are from this year trying to train our workers again in field grafting, an art that has almost but vanished,’ says Engelbrecht. ‘Marko Roux, a viticulture friend of mine, told me how amazing a grafting field day was last year with Jeff Joubert, one of the few remaining viticulturists that knows all these techniques.’

‘Last year I interplanted a lot of Eben's vineyards with just rootstock. I did the same at Brookdale in Paarl, owned by Tim Rudd of the UK. This year we will graft it. Some with clean clonal material, some with massale selected material. It is a year that excites me in terms of the knowledge I could gain, and help share with our farm workers. It is time to get back to basics. Back to our roots. Back into the vineyards with our feet, heart and soul.’